The physicist and science writer Mario Menichella has just released the English version of his interesting book “I segreti dell’E-Cat”. The aim of the book, is to bring an understanding of how the E-Cat really works to all those who are fashinated from this new technology which could change the human destiny.

You can find all information about its contents HERE. 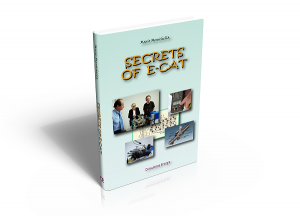 I wrote this book because I am a curious physicist.

I had read of the potentially revolutionary reactor of Rossi Focardi – better known as “Energy catalyzer”, or E-Cat – only a few days after its public demonstration of January 14, 2011 in Bologna. At first, I did not give too much weight to the thing, even though I wrote to Rossi to compliment him and give some tips on how to communicate to the public news so delicate. But fate, evidently, reserved me much more.

Mario Menichella organized  a few months ago a popular conference on Cold fusion in Viareggio and also arranged a long interview ( that you can see HERE in Italian ) with Sergio Focardi, one of the protagonists of the story that led Andrea Rossi to invent the E-Cat.